September 16, 2019
Here are some standout individual performances at both the high school and college level from over the weekend. 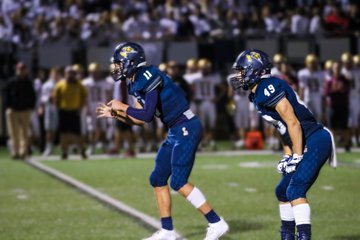 JD Antaya, Blackstone Valley Tech: The senior rushed for 133 yards and a touchdown on 20 carries as the Beavers beat Northbridge, 21-8.

Jason Demild, American International: In his team's 28-23 win over Bentley, the sophomore quarterback threw for 200 yards and a touchdown and rushed for 75 yards and two more scores.

AJ Dillon, Boston College: The junior running back carried the ball 27 times for 151 yards and a touchdown in the Eagles 48-24 loss to Kansas.

Brian Frieh, Barnstable: This senior running back is having a terrific year behind his big line, as he rushed for 154 yards, two touchdowns on 11 carries — and a two-point conversion — in his team's 44-0 win over Braintree Saturday.

Cincere Gill, Mansfield: The junior running back had 192 yards and a touchdown on 19 carries in the Hornets' 38-16 loss to La Salle (Ohio) Friday night.

Danny Gisonno, Lynn Classical: The first-year starting quarterback rushed for 192 yards and two touchdowns, and completed 14-of-20 passes for 152 yards and three touchdowns in the Rams' 48-40 win over Brockton.

Liam Hines, North Quincy: In a 31-13 loss to Silver Lake, this junior made nine tackles and two interceptions.

Clayton Marengi, Lynnfield: The senior quarterback completed 9-of-14 passes for 172 yards and two touchdowns, and also rushed for 40 yards on five carries in his team's 43-7 win over Newburyport.

Zach Mitchell, Catholic Memorial: This junior defensive back made two key interceptions to help preserve his team's 35-20 win over St. John's of Shrewsbury.

TJ Morgera, Shrewsbury: This senior was an offensive machine in his team's 46-29 win over Tantasqua, as he 239 yards and four touchdowns, and completed 6-of-10 passes for 94 yards and two touchdowns.

Naujiye Neal, Lowell: The junior quarterback threw for two touchdowns and rushed for another as his team picked up a 33-20 win over Billerica.

Jovan Nenadovic, Tufts: The Jumbos pulled off a huge win over the weekend when they topped Trinity, 14-8. This defensive end led the way with three sacks and five tackles for loss.

Anthony Oquendo, Fitchburg: In his team's 35-28 win over West Springfield, the sophomore rushed 24 times for 233 yards and three touchdowns, including the game-winner with nine seconds to play.

Luke Rosa, Milford: The senior running back/linebacker had a great game on both sides of the ball in his team's 20-13 win over Attleboro. He carried the ball 19 times for 106 yards and a touchdown and added two receptions for 27 yards. Rosa also made 12 tackles and 2.5 sacks on defense.

Johnny Rosario, Merrimack: The Cambridge native caught four passes for 78 yards — including a long of 43 — in the Warriors' 42-14 loss to St. Francis (Pa.).

Sam Wing: Oxford: In the Pirates' 18-12 win over Oxford, the junior running back had 143 rushing yards on 26 carries.

August 16, 2019
With the official start of the 2019 MIAA season, we kick things off again with a six-team deep batch of all-state teams.
This list was difficult to compile because there are simply so many quality athletes in the sport this fall. In one sense, it made it easier to fill out all the positions. On the other, slotting each portion and deciding between first-, second-, third-teamers, and so on, was a massive challenge.
That said, we saw and evaluated many of these players both in person last year and in the offseason, and conferred with many coaches on who their best players — and who the best players they've coached against — are.
There are some players who are listed in positions they are less well-known by so we could fit them in the appropriate slot. Also, we might have to look at the format in the future, because fewer and fewer offenses feature just two wide receivers on the field at once. We will cross that bridge when we come to it, though.
Please alert us to any factual inacc…
Read more

September 23, 2019
Here are some standout individual performances at both the high school and college level from over the weekend.
Players listed alphabetically.

Matt Arvanitis, Holliston: The senior quarterback threw for a touchdown and rushed for another in the Panthers' 21-18 win over Barnstable.

Dan and JJ Block, Amherst: Dan, a running back, and his twin brother, JJ, an aptly-named fullback, had key performances in the Hurricanes' 12-9 win over East Longmeadow. Dan had 127 yards rushing and two touchdowns on 12 carries. He also made 10 tackles at linebacker. Block put defenders on their backs all night and made a sack on defense.

Matt Brehon, Merrimack: This running back rushed for 175 yards and three touchdowns in the second half of the Warriors' 76-7 win over Mayville State.

Connor Bryant, Methuen: In the Rangers' 26-14 win over Tewksbury, the senior quarterback completed all 11 passes he attempted for 146 yards and two touchdowns. He also carried the ball 24 times for 191 yards and …
Read more

October 14, 2019
Here are some standout individual performances at both the high school and college level from over the weekend.

Matt Crowley and Matt Duchemin, St. John's Prep: Crowley completed 11-of-19 passes for 302 yards and four touchdowns in his team's 34-32 loss to Catholic Memorial. Duchemin had over 200 all-purpose yards with five receptions for 172 yards and two touchdowns. He also played every snap at cornerback.

Chris Cusolito, Melrose: This running back put up 173 yards and three touchdowns on eight carries behind one of the best offensive lines in the area in a 35-6 win over Woburn.

Connor Degenhardt, Holy Cross: The Westford native had his best game of the season in the Crusaders' 47-31 win over Brown, as he completed 20-of-33 passes for 315 yards and four touchdowns.